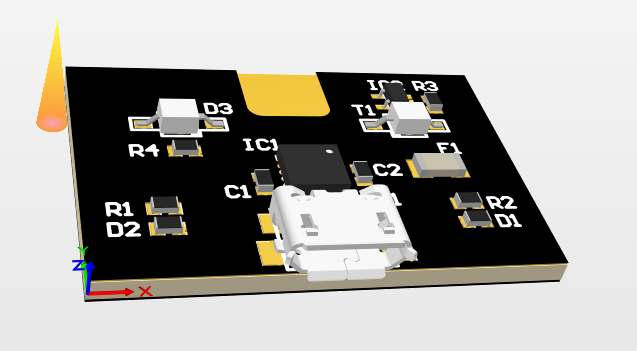 A while ago i noticed, that the “USB” communication of my Multimeter was really just very low Baud RS232 transmitted via an IR LED, so i naturally put together a quick circuit to convert that to USB and who would have guessed, it actually worked with the original software.

Now i don’t really have a need for a USB bridge for my Multimeter, especially because the original one is expensive (30€ as of Feb 10th) and has a non removable cable, so once I wanted to use it for something it would inevitably be at the bottom of some box and hard to find. So the original is pretty much little use for a lot of money.
But i figured if the meter had a USB bridge built in, i might just use it occasionally.

This is the back of my, honestly quite well worn multimeter, the cutout is where the USB bridge would slide into.

So i had the idea to make a pcb with a USB-UART bridge that would fit into this cutout, but have a USB socket on it, that wouldn’t get in the way when using the meter normally, even while inserted.
So after a quick PCB design session i came up with the simplest PCB I ever made and ordered it from china.

The hardest thing was probably to find a usable photo-transistor, as it had to be effectively reverse mounted (the sensitive side facing down through a hole in the circuit board) but be flush on the other side, so it could still fit into the meter. I also chose to include an IR transmitter diode, even though there is no RX circuitry in the meter, just in case there is another meter with the same cutout that has it (afaik all Voltcraft multimeters that have USB capability use a similar cutout on the back).

The plastic case was designed in Fusion 360 and printed with SLA 3d printer (the quality of the prints is insane for the price in my opinion) and will be glued onto the pcb after an M2 nut is inserted. There is a small screw going through the hole holding the bridge in the meter.

So far i have had the version one in the meter since i made it about half a year ago and i have had no issues with it.

There is still room for improvement, though:

So far i always had a schmitt triggered inverter on the board, as I am not sure about how happy the UART bridge would be with the fairly slow edges of the signal from the photo-transistor, I might try to optimize that out in the next version.

The USB-UART bridge seems to be out of stock rather often at digi-key recently, and is quite expensive, so i might swap that for a HT42B564, a cheaper alternative, that coincidentally (wink wink) is available at the JLC PCB SMT assembly service, which brings me to the next point;

Assembly of the boards is quite time consuming, so if I actually sell any of these i will probably have them assembled by JLC PCB and just solder on the photo-transistor and the IR transmitter, as those components aren’t in their catalog.

So all that is left for me now is to make a couple and put them on ebay in a few weeks once I finished my exams for this semester.
If you are interested in buying one now you can contact me directly, maybe I will make one for you 😀

Fun with a Tesla Coil