Ever since working with those high power LED COBs in my Flashlight project, I wanted to improve the lighting at my bench.
Not that it was actually necessary, the 1000lm Ikea LED lamps worked perfectly, but having more light with a nicer quality can’t be a bad thing right?
And when I found some cree 95 CRI LEDs on ebay for cheap, I know the time had come for the existing lamps.
So I recycled the boost-converter design from my flashlight, and made a small converter that could comfortably fit where the lamp holder used to live.

I actually considered using the Luminus warm dimming LED modules with built in controller, but their power output was a little low and the dimming effect was not very convincing. When dey were dimmed, they looked like an orange lamp and not very warm white as they should.

The hardest part was probably finding a heatsink that would fit into the lamp, and still dissipate enough power, but after some searching I found a round one with lengthwise fins on aliexpress (lengthwise, to allow convection to occur all the way along the width of the fin). I also included a thermistor above the heatsink, to allow the lamp to thermally limit, so even if the heatsink doesn’t manage to deal with the power from the LED, it isn’t going to heat up to 10000°C and light the house on fire

I also wanted to be able to dim the lights. So a 10V analog dimming signal is a reasonable choice right?
Wrong! (ok maybe right) I wanted to avoid noise picked up from the environment causing the lamps to change brightness, and when using the same conductor for the 0V reference that carries the lamp current, you might actually create an oscillator: the current results in voltage drop across the cable, resulting in a lower led current, resulting in lower drop, resulting in higher current, ….
So what is the solution? Differential signaling 😀
instead of measuring the voltage with ground being the 0V reference, we use two signals, and the value is the difference between the two. This way any interference that induces noise, gets canceled out, as long as the noise gets induced equally as strong into both conductors. To create such a signal, we just need an inverting amplifier to mirror the control voltage at a fixed point (usually 50% supply rail). And then just use a standard differential to single ended op-amp circuit on the other end to drive the current control input. I also included pots, that allow setting of the maximum and minimum brightness (though they are not in this schematic) and a switch, that forces the two signals to be equal (0% power).

To install the thing in my lamp I removed the lamp holder and the cable, then pulled a new four conductor one through (in my case I had to remove the black cable guides, as my cable was too thicc 😉 ). Assembled the driver and screwed it to the heatsink (this was actually kind of hard and I ended up just using a threaded rod from front to back), connected the LED and the 24V power supply and I was done 😀

One little issue I found, is that the reflectors of my lamps (default IKEA desk lamps) have a focal point close to the point where I put my LED, and it created an awkward bright spot in the middle of the lit up area, so I also painted them matte white. 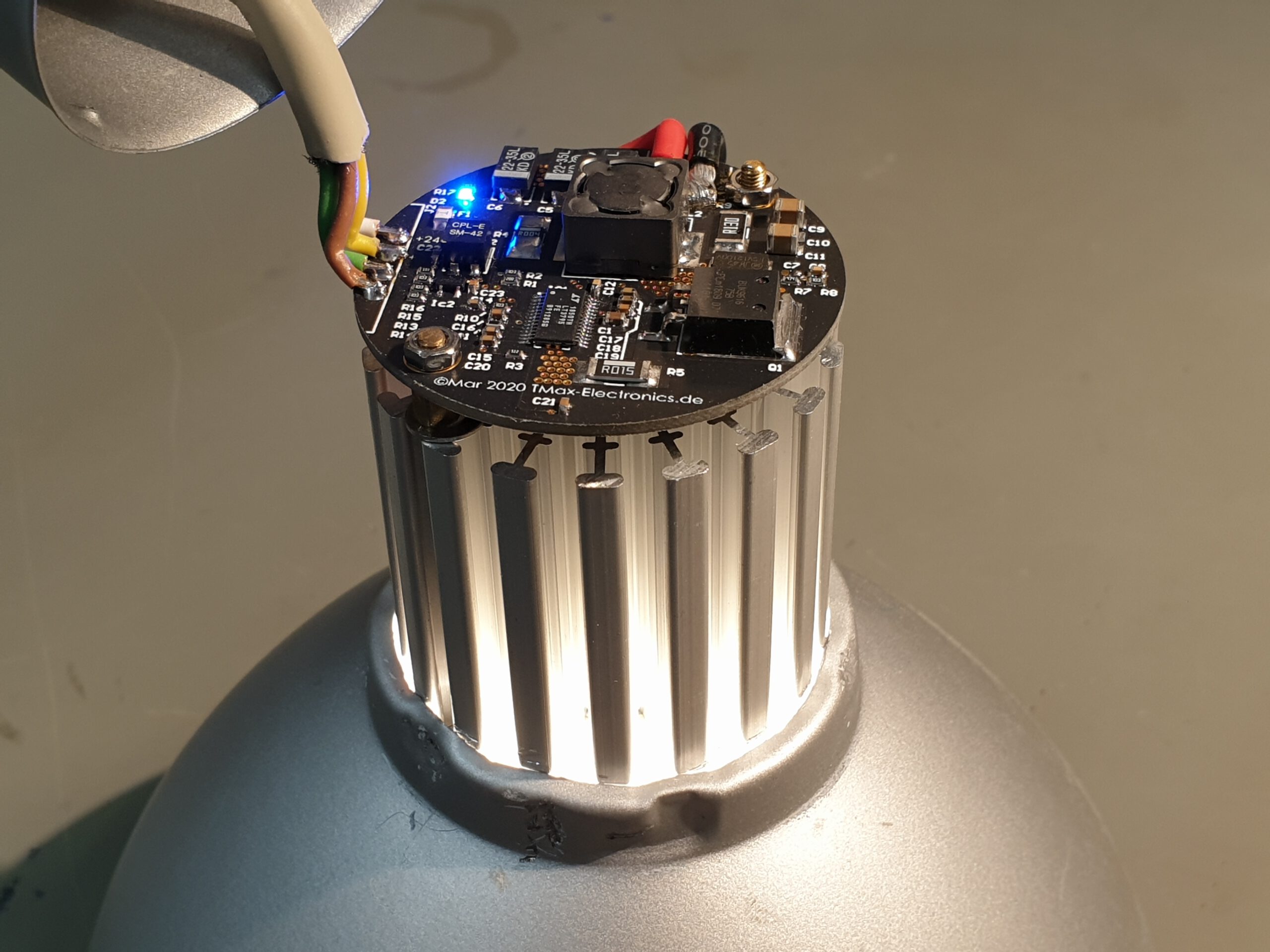 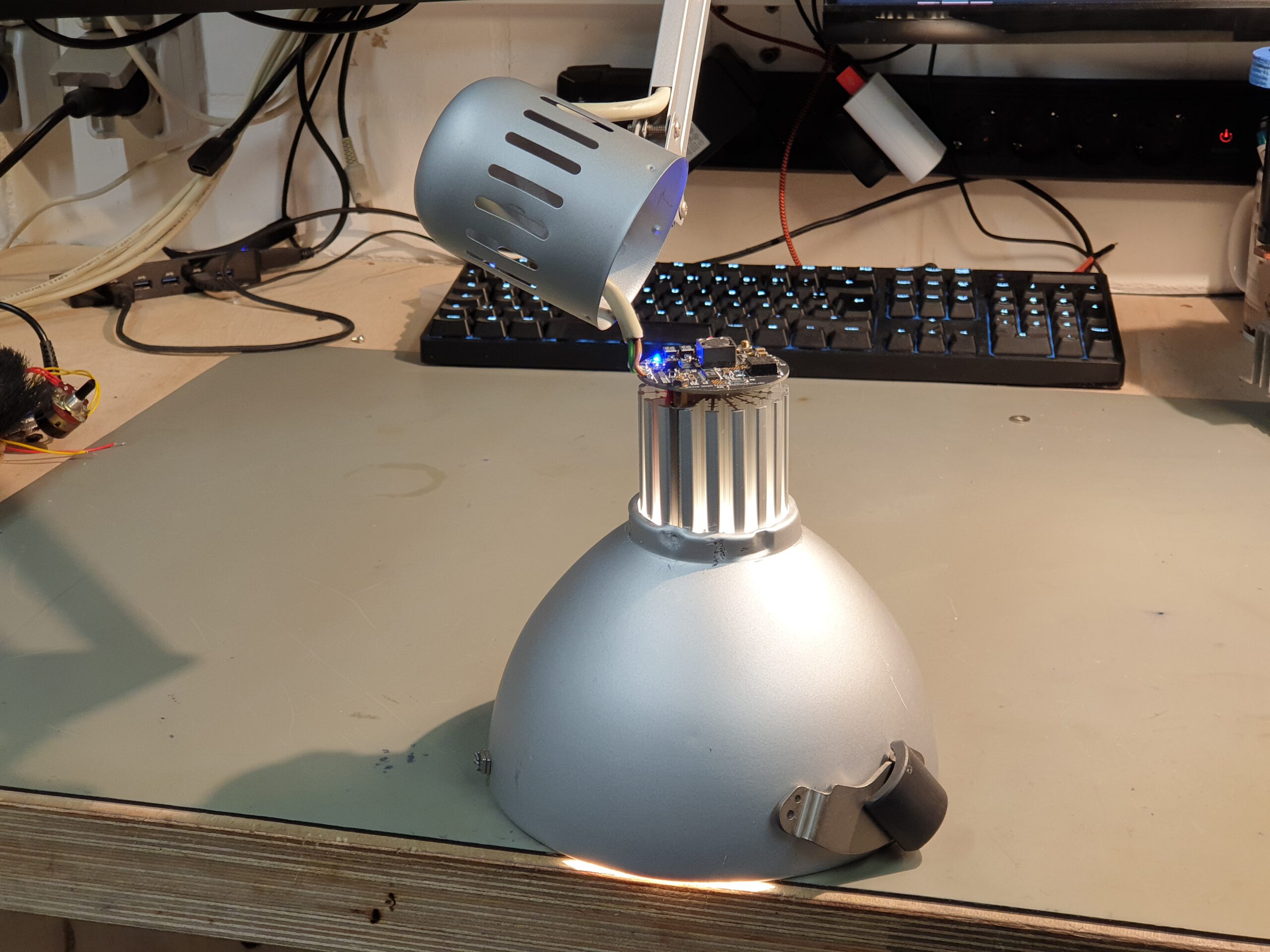 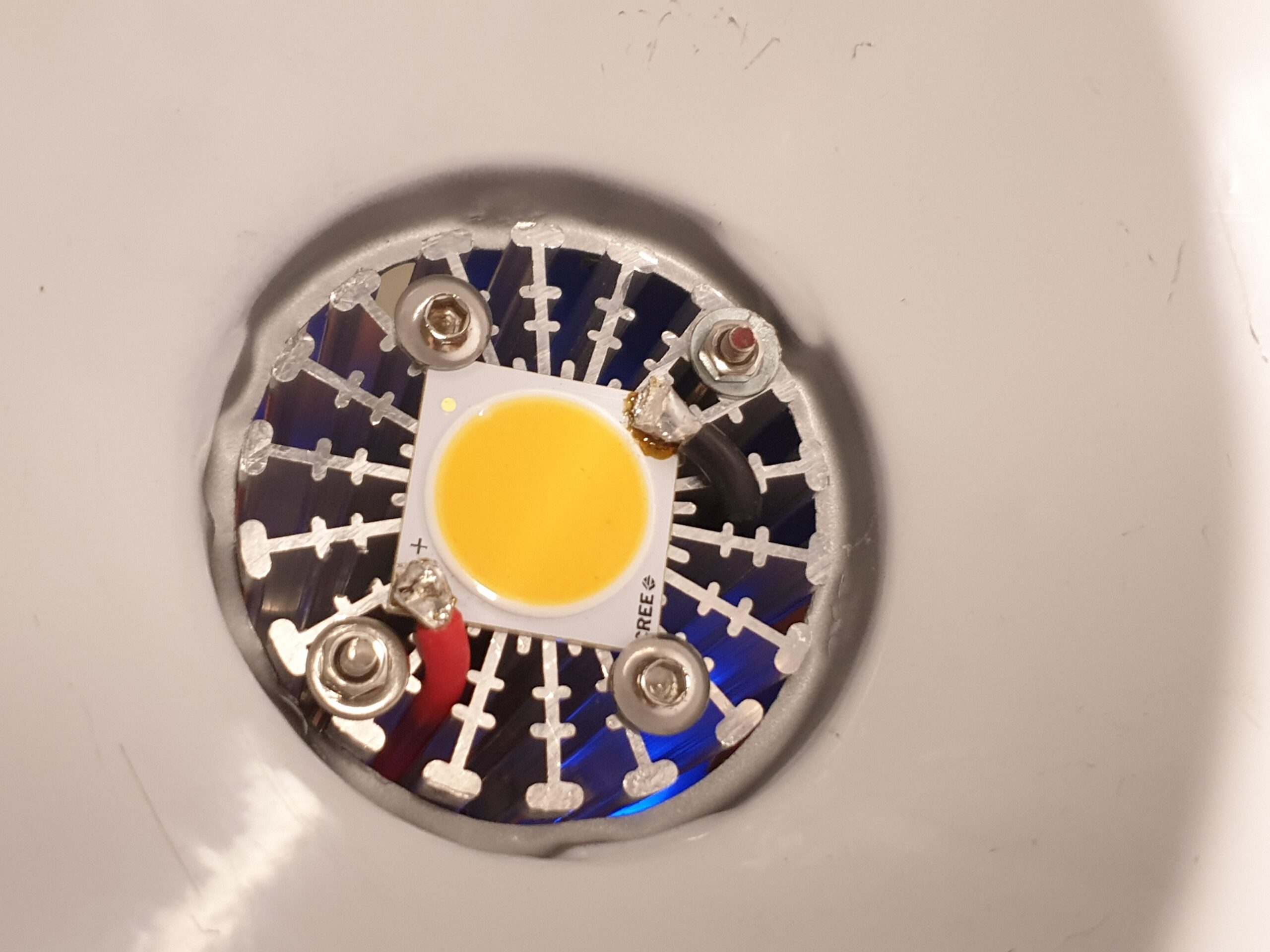 I must say that I have never seen LEDs that have such a nice light tone before. They look exactly like halogen lamps, but waaay brighter. For comparison I put in an old 60W tungsten one again, and was shocked at how dark it was, one really does get used to how bright LEDs are. The maximum power of the converters that I set is 50W/lamp, so 150W total, but the thermal regulation reduces that a bit, and it eventually settles at around 45W/lamp with a heatsink temp of 75°. Here’s a before and after comparison of skin tone:

The best thing about the brightness of those lamps however, is that it gives me the ability to record awesome looking video just with my phone. If you look at my “trying to make gas discharge lamps” video, you can see what I’m talking about 😉

Now of course you might ask; Is this really necessary? Is this actually a good idea?
And of course the answer is no 😉 If I wanted to just have nice light in my basement I would have bought a better lamp, if it should have been cheap I wouldn’t have used boost controller chips, of which a single one cost more than all of the LEDs together.
The reason I built it this way was simply fun 😀 And maybe a little bit upgradeability, as those controllers can handle up to 250W/lamp.